Six COVID-19 Treatments in the Works

Researchers throughout the world are working around the clock to develop a safe and effective treatment for COVID-19.

Below is an overview of some of the most promising treatments currently in development.

US biotech company Gilead Sciences this week expanded access to its experimental COVID-19 drug, remdesivir, pledging to donate 1.5 million doses to use on seriously ill patients.

More than 1,700 patients have already been treated with remdesivir, a drug initially designed for Ebola.

“While we are working with the utmost sense of urgency on the immediate needs before us, we are also looking forward,” says Gilead CEO Daniel O’Day. “Over the next weeks and months, we will be able to further increase our supplies of remdesivir as raw materials with long lead times become available for manufacture.”

Gilead is on track to boost its supply of remdesivir to more than 1 million units by the end of the year.

Researchers in Australia believe Ivermectin, an FDA-approved drug designed to treat onchocerciasis (a parasitic tropical disease) could be repurposed for use against COVID-19.

“We found that even a single dose could essentially remove all viral RNA by 48 hours and that even at 24 hours there was a really significant reduction in it,” says lead researcher Dr. Kylie Wagstaff.

Ivermectin is widely available due to its inclusion on the World Health Organization’s list of essential medicines and its status as an FDA-approved drug gives it advantages over the development of new drugs, which can take years.

“So what we have done is we’ve engineered neutralizing antibodies that go and block the virus,” says CEO Dr. Jacob Glanville, explaining that COVID-19 cells use “spikes” to penetrate human cells. “We’ve identified a series of super potent antibodies that block those spikes and therefore make the virus no longer infectious.”

Speaking Friday on “Tucker Carlson Tonight,” Glanville noted that antibodies are what transformed Ebola from a “dangerous crisis to a manageable treatment.” Antibodies can be produced much faster than vaccines.

“Our next move is we hand this off to the US military, a consortium from the Gates Foundation, and some private groups,” says Glanville. “And all of them are going to test the potency of neutralization of our therapeutic.”

Glanville, who starred in the recent Netflix docu-series Pandemic, hopes to begin human trials in August. Once the therapeutic is deemed effective and safe, it will be produced as fast as possible and available for compassionate use.

In the United Kingdom, vaccine company Stabilitech has already started pre-clinical trials with an oral vaccine for COVID-19.

“I believe that the best approach for us is to fully understand what the virus is doing,” says Navid Malik, executive director of the company’s life sciences division. “And then adapt a vaccine strategy, which we can do using new technologies to create these vaccines very quickly.”

Navid warned that the companies ‘making the most noise and earning the most funding’ are not necessarily doing the best work.

“I think it’s very important that we sit back and actually reflect on where the virus originated from, which was from an animal species, the bat, and we need to understand exactly what this virus is able to do and what will happen when we start creating vaccine approach and how we deploy that.”

Hydroxychloroquine is a derivative of the anti-malaria drug chloroquine that for decades has been used to treat autoimmune diseases including rheumatoid arthritis and lupus.

A report published this week by healthcare polling company Sermo suggests physicians worldwide chose hydroxychloroquine as the most effective COVID-19 treatment from a list of 15 existing treatments.

As noted by COVID-19 expert Dr. Anthony Fauci, there has been some anecdotal evidence to suggest that hydroxychloroquine helps ease COVID-19 symptoms. But there has not been a controlled trial to prove its effectiveness.

Even so, President Trump has described hydroxychloroquine as a “game-changer” in the fight against COVID-19 and has promised to spur production of the drug.

Speaking to reporters after an uncomfortable press conference with the president, Dr. Fauci said, “What the president was saying is that we’re going to look at all of these drugs and we’re going to try to get them available in the context of some sort of protocol. Well, you just don’t distribute drugs willy-nilly…You may make it more accessible than you would have previously, but you do it in the context to at least get some feel for both safety and whether it works.”

The president’s enthusiasm for hydroxychloroquine has sparked an increase in sales, in some cases preventing lupus patients from refiling their prescriptions. Others have tried taking various forms of the drug in hopes of preventing COVID-19. One man in Arizona died after ingesting chloroquine phosphate, an anti-parasitic used in fish tanks.

Researchers at New York Medical College are hoping to treat seriously ill patients by injecting them with plasma taken from individuals who have already recovered from COVID-19.

“When someone has recovered from a disease…they have antibodies that their body has built against that disease,” explains lead researcher Dr. Alan Kadish. “You can basically remove all the blood cells and other elements in the blood that could cause an allergic reaction and you give the plasma to a patient who’s sick. And that plasma contains antibodies that can kill the virus.”

The FDA has approved the use of plasma therapy to treat COVDI-19, although it is unclear how effective the treatment will be. Plasma therapy does not provide permanent immunity like a vaccine, but it does boost the chances that critically ill patients can defeat the virus.

Plasma therapy is not an appropriate solution for large numbers of people, adds Kadish, because it “requires a specific donation from a recovered patient for each therapy. It’s not the kind of thing you can scale up. This is a therapy for people who are on their way to not making it who are hospitalized.”

There are a lot of promising treatments out there and we will eventually find one that works. We may have 60 million people get sick – like with the flu – but if people are not dying then we are okay.

At this time, the World Health Organization says there is “no evidence” that any medication can prevent or cure COVID-19.

Battle for the Border: Trump Threatens Shutdown for Wall Funding 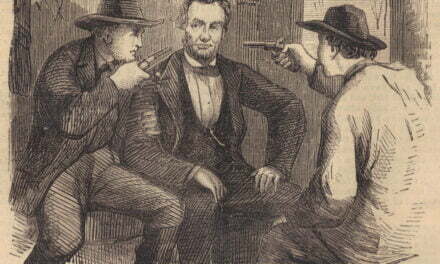 Lincoln Has Been Kidnapped AGAIN