Putin must not be allowed any measure of victory

Putin has reached the Hitler stage.  Diplomacy will never work against a person who is insane.

We hear a lot from both Republicans and Democrats that the American mission is to stop the invasion.  There are even some vague references to having Russian troops withdraw from Ukraine.  But there is little said about actually defeating Putin – and what that means specifically.

We first much realize that Vladimir Putin is a psychopath – the most dangerous head-of-state since Hitler.  He makes China’s Xi Jinping and North Korea’s Kim Jong-un look like peacemakers.  For all their tough talk and saber rattling, Xi and Kim have not invaded any sovereign democracies. Only Putin has disrupted the world order with his military.  This may be the worst example, but not the first.

Ukraine is now in the crosshairs of Putin’s maniacal vision of world domination – but his enemies and future victims are in plain view.  He has made no secret of his ambitions.  He is not seeking Russian domination of the world.  No. No. No.  He is seeking Putin domination.  His ruthless attacks are also directed at the Russian people who will not submit to his authoritarian rule.

In his recent speech, Putin has hinted at a genocide among his own people who will not support his madness.  He calls them “traitors,” “bastards” who should be “spit out like a bug that entered the mouth.”  (The man has a way with words.)  His rhetoric has a ring of ethnic superior not unlike Hitler.

The world will not be safe as long as Putin is alive and in power … period.

All the rhetoric coming out of President Biden, NATO, the European Union, and the feckless United Nations allude to some sort of secession of the fighting as the goal.  That is nothing less than appeasement and a victory for Putin.

What are the terms for Putin ending his invasion? Does he get the sanctions lifted?   Does he get to keep the Crimea?  Does he keep the Donbas region – those phony puppet republics that he declared and recognized in eastern Ukraine?  Does he get an assurance that what is left of the Democratic Republic of Ukraine will never join NATO?  Does he get a de-militarized Ukraine?

When western diplomats talk about finding an off-ramp for Putin – or some face-saving resolution – they are handing the Madman of Moscow a huge victory.

The fact that Biden has consistently assured Putin that neither America nor NATO will engage in anything that Putin would consider provocative, is a step toward appeasement and partial surrender.  No no-fly zone.  No jet fighters.  No offensive weapons.  Biden’s policies mean that total victory over Putin is not even a consideration no matter how many red lines he crosses.

Biden even echoes Putin’s contention that a no-fly zone or military involvement by the west is provocative … escalatory.  How can you impose one in the future if you already told the world that such action would lead to World War III?  Why Biden would give away such options as negotiating points is inexplicable.

Calling Putin a thug … a bully … and even a war criminal has no meaning – no impact. It only proves the legitimacy of the old children’s couplet, “Sticks and stones may break my bones, but words will never hurt me.”  In fact, Putin is willing to have a few “stones’ hitting his soldiers, his people, his friends, his oligarchs … as long as he is safely ensconced in his physical and psychological bunker working his maniacal plans.

PUTIN MUST BE DEFEATED … DEPOSED …  AND PREFERABLY DEAD!

That means the commitment must be for Russian troops to be driven from ALL of Ukraine – including the Crimea and the Donbas region.  Russia must be required to pay reparations for the damage that it has done to Ukraine.  Putin must go.

(How about we offer the Oligarchs who are holding Putin’s money that the sanctions will be removed, and they can keep all their money – and Putin’s too — as long as they have him assassinated.  Kind of a bounty.  Okay, I know that is extreme – even impractical — but it would be a multi-billion-dollar reward for anyone making it happen.  But, I digress.)

Realistically, there is only one way that a victory over Putin can be attained.  NATO and the European Union must engage with Putin militarily at some point.  The attacks on civilians should have been that point.  The atrocity of the attack on the theater harboring women and children should have been that point.   There must be a no-fly zone imposed. A Berlin-style airlift serving the cities under siege.  The world democracies must reject Putin’s empty threats of a nuclear world war and go on the offensive.

Putin is a rabid dog that must be put down.  There is no other option – unless we want to watch his heartless military continue to wreak havoc on the world order.  Stopping him later will be a much bigger problem.  And in the meantime, millions of innocent men, women, and children will endure the most inhuman suffering and horrible deaths.

Using diplomacy against a deranged leader — who abuses negotiations with strategic delays, irrational lies, and habitually broken promises – is the method of losers.  It has been repeatedly said that Putin will only respond to force.

The choice is very simple.  They say that Putin will never back down without some measure of victory.  It is critical that he does not have such a victory.  And there seems only one way to stop him sanctions and diplomacy.  Yes, it is unfortunate.  And yes, it would broaden the war.  But is there really any other choice? 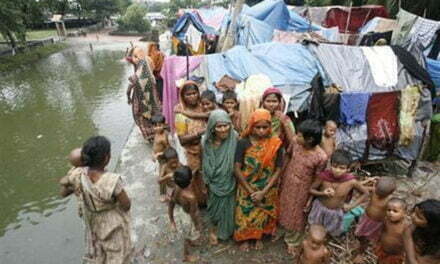 RNC Chairperson Ronna McDaniel About to be Thrown Out

Insurrection in the FBI Against Trump?