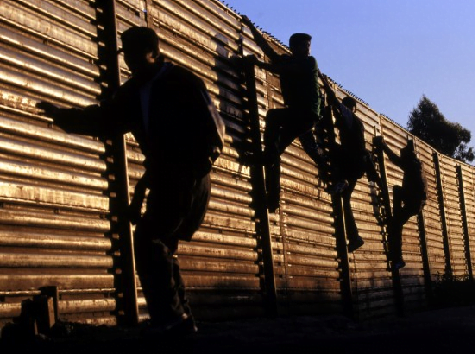 President Biden has created a border crisis with malice aforethought. The caravans of migrants are again crossing the United States border in record numbers. They know that no matter how they enter America, they will get to stay.

In just the past four weeks, our border guards have arrested more than 100,000 illegal border crossers.  This is the highest number in a four-week period in more than five years – pre-dating the Trump administration.  Officials expect that number to reach one million by the beginning of summer.

When a reporter called the situation at the border a “crisis,” White House Press Secretary Jen Psaki pushed back.  She admonished the reporter, saying that “We should not be putting labels on it.”

While most of the east coast news media are totally ignoring what is going on at the border, it has gotten so bad that even CNN is starting to cover the issue – saying that our border security personnel are “overwhelmed.”

There is also a surge of unaccompanied minors – more than 3400 in the past few days – 10,000 in total.  There is insufficient space to house them.  Nine out of ten minors do not have a bed in which to sleep.  The government is putting up make-shift barracks — tents.  The handling of the kids is looking a lot like what had the Democrats going ballistic during the Trump administration.

But the greatest tragedy may be the kids who are not safely in the hands of U.S. border agents.  One migrant said kids begging and doing whatever is necessary to survive line the long trail to the border. “Many.” He said, “will not make it.”

Biden policies remove virtually all barriers – and create a number of enticements.

By Executive Order, Biden ended Trump’s deal with Mexico to retain asylum-seekers south of the border as officials review applications.  Biden has reinstated the old “catch and release” program by which those apprehended at the border were given a court date and then released into the general public – including criminals.  Many of them we never see again – at least not until they wind up in the news for killing some innocent American.

The Trump Justice Department was taking actions against sanctuary cities to eliminate the creation of Democrat safe havens for illegal aliens.  Biden has ordered the cancelation of all those actions – literally establishing America as a sanctuary nation.

Biden immediately called a halt to the construction of the border wall. He even canceled the sections that have been contracted, paid for and partially erected.  That action alone has essentially been an enormous welcome mat for illegal entry.

The Biden administration is undermining the effort of our Immigration and Customs Enforcement (ICE) agents in ferreting out the criminal elements among the illegal aliens.  This is a particular threat to the minority communities where these types settle to carry out their evil and deadly deeds.

Under the Biden administration, illegal migrants seem to be the only people who do not have any travel restrictions due to the Covid-19 pandemic.  Hundreds of those known to have Covid-19 are not quarantining.  And there are no effective procedures for determining how many may be asymptomatic virus carriers.

Trump proved that the right policies can restore the concept of “legal immigration” – and that we can protect the border.  Through strict enforcement, America was able to reduce the number of gangbangers and drug cartellians entering America – and to track down and arrest or deport the bad actors.

The question is why do Biden and the Democrats favor open borders and illegal entry?  Why do they do everything possible to prevent law enforcement of dealing with clearly illegal activities?

The one answer that dominates the conversation is that they believe that the masses of illegal aliens residing in America will enhance their political base in both the near- and long-terms.  That seems like a very cynical explanation – but is there a better one?  Even Biden and the Democrats cannot come up with a better one.

What is happening right now is only the beginning of an increasing rush to the American border.  It will not be long before even Psaki will have to admit it is, indeed, a humanitarian crisis.  But even then, Biden and the Democrats will not change their open-border policies.

Is Beto calling for a Civil War? Because that’s what he will get…